Tenerife braces itself for another Calima this week!

Residents of Tenerife are once again bracing themselves for another Calima, a suspension of dust and sand that is carried on the wind from the Sahara Desert out across the Atlantic. Tenerife and the other Canary Islands are more often than not in its direct line of fire.

According to weather agency AEMA ( Agencia Europea de Medio Ambiente) this latest Calima will reach Tenerife tomorrow (Tuesday 14th January 2020) and will linger until approximately Thursday 16th January. Temperatures are not expected to rise significantly on this occasion, with only minor daytime increases and virtually no night-time increases at all. 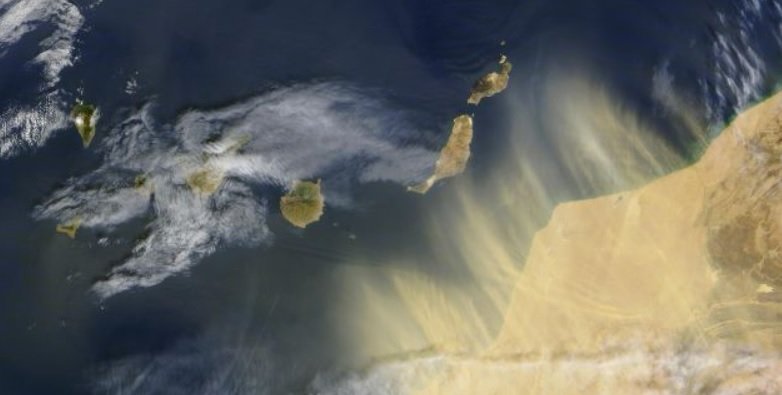 Satellite image of a Saharan Calima blowing towards Tenerife

Calimas typically affects children, the elderly and those with respiratory problems. Fortunately for most of us, they are little more than a minor inconvenience prompting an unscheduled visit to the car-wash.

Calimas are basically created by a storm or sudden change in weather in the ‘Saharan Air Layer’, a hot, arid layer of dust that sits over the Sahara desert in Northern Africa. Calimas are often confused with ‘Siroccos’, hot winds that blow north and west from the Sahara, but which carry little or no dust/sand suspension. An actual ‘Calima’ always features a visible dust suspension and change in sky colour, accompanied by reduced visibility.

However, what is a minor inconvenience to Canarian residents and tourists has far greater – and positive – implications for further flung regions. For instance, many people are unaware that the Amazon Rainforest owes its very existence to Calimas. Every year, Calimas carry suspensions of phosphorous and other rich nutrients across the Atlantic, which are deposited over the Amazon Rainforest via rainfall. Scientists estimate that over 27 million tonnes of Saharan dust is deposited in the Amazon basin every year, enough to fill almost 700,000 artic trucks.

The following NASA video perfectly illustrates the movement of Calimas via satellite imagery: