A humorous look at driving habits in Tenerife

The following is a light-hearted tongue-in-cheek look at alleged stereotypical driving habits in Tenerife and is purely intended as humour. Tenerife Guru does not endorse or recommend any of the driving habits or actions referred to below, most of which are illegal and likely to result in heavy penalties or even jail time! 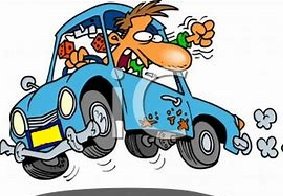 Perplexed by the standard of driving in Tenerife? Lets take a look at some of the more interesting habits of the modern Tenerife driver:

1. Parking – To the Tenerife Driver, finding a legal parking space is a nasty chore forced upon them by the authorities every time they wish to exit their vehicle. Left to their own devices, Tenerife Drivers would quite happily leave their car wherever they damn well felt like. How dare the authorities impose restrictions on them! The only acceptable response is to demonstrate maximum contempt for the law.

The following rules of Tenerife parking are to be followed at all times:

a) If you should find there are no parking spaces available, simply invent your own space. This may be in the middle of the road at a junction, or simply double or even triple parked next to the car whose space you wished you had got to first. Also, feel free to park on any striped sections, despite the fact that this actually means ‘no stopping or driving here’, let alone ‘parking’. Parking across private driveways and entrances is also fair game.

b) When manoeuvring your vehicle into a space, remember that every car on the island has bulletproof, impact and scratch-resistant bumpers. This means that you can parallel park by simply reversing your car into a space until you feel that reassuring ‘crunch’ on the car behind. Follow the same procedure when manoeuvring the front of the car into the space. Just think how much you will save on your new car by not paying for those silly parking sensors.

c) When double parking or engaging in other illegal parking manoeuvres, simply put your hazard lights on. In Tenerife, switching on one’s hazard lights makes your vehicle instantly invisible to the authorities and absolves you from any parking penalty, hence allowing you to extend your illegal stay whilst you nip off for that well earned siesta.

2.            Roundabouts – In their infinite wisdom, Tenerife Drivers consider that roundabouts don’t actually exist. Hence, one may ‘enter’ a roundabout without looking or stopping. Alternatively, don’t enter the roundabout at all. Instead, just sit there holding up traffic whilst gap after gap goes sailing by. This is also a perfect moment to make a call or send a tweet. Frequent lane changing on the roundabout is also compulsory, but before you do so, make sure you are in the wrong lane and position to begin with, otherwise it’s no fun. Many Tenerife drivers enjoy the thrill of sitting in the centre lane until they are almost beyond their exit before quickly swerving across both lanes whilst remembering not to signal. Alternatively, just hog the outside lane of the roundabout the whole way around and then lean on the horn if anybody in the inside lane actually tries to cross your lane to reach their exit. Other drivers naturally find this hilarious, and will typically wave their arms and honk their horns to demonstrate their appreciation. Feel free to return the compliment.

3. Autopista/motorway slip roads – When entering a motorway, make sure that you proceed at a snail’s pace. The fact that you are about to enter a fast moving flow of traffic doesn’t matter, just carry on crawling at 20kph. Better still, why not treat it as a ‘give way’ sign and actually come to a stop at the end of the slip road? Once you are certain there is no available gap in the fast-moving traffic, edge two wheels across into the lane of traffic, remembering to keep to a snail’s pace. In the unlikely event that the approaching Tenerife driver actually slows down and/or indicates his willingness to let you in, simply pretend you didn’t notice and slow down even more. In fact, feel free to come to a complete stop, particularly if you are now holding up other traffic trying to join the motorway behind you. Then, the moment the driver trying to let you pull out finally loses patience and speeds up to get past you, cut out in front of him without warning, remembering again not to indicate. If he pulls alongside to gesticulate, feel free to return the favour, as it was obviously his fault in the first place.

4.   Veering out of one’s lane – This is a particularly popular pastime in Tenerife. When proceeding along a perfectly straight stretch of motorway or town road with two or more lanes, allow your vehicle to casually drift across into the other lane without signalling. Don’t actually complete the change of lane, simply straddle both lanes for as long as possible. This manoeuvre is best achieved when another car is trying to pass you. Maintain your poor positioning for at least 30 seconds, and under no circumstances should you bother to look out of your window to ascertain your error. When you eventually commit to one or other lane, make sure you indicate in the wrong direction whilst you complete the manoeuvre.

5.   Indicators – Most cars in Tenerife have their indicators disconnected when arriving on the island. In the event that yours actually work, it is preferable that you do not use them for fear of confusing other Tenerife drivers. There are however a limited number of acceptable uses of the indicator, namely:

a) Misdirection – Feel free to signal in the completely wrong direction as you perform a manouevre. It will keep other drivers on their toes and helps to bring a little excitement to the daily grind.

b) Confusion – This is particularly popular when slowing down on the motorway or when making an abrupt stop at a pedestrian crossing. When encountering any situation in which things are not proceeding according to plan, simply turn on your left indicator. This is known to solve all road problems and will let other drivers see that you are ‘the man’. Also feel free to signal in this fashion if you are racing up behind someone’s tailgate and desperately want them to move over. The accomplished Tenerife driver is able to move so close to the car in front that its driver can’t actually see your indicator unless they hang right out the window.

6.   Tailgating – Truly experienced Tenerife Drivers know that the best way to drive is as close to the vehicle in front as possible. So go ahead and park yourself right up the driver in front’s backside. Traffic experts have scientifically proven that this style of driving will get you to your destination up to a full 10 seconds earlier than when leaving a sensible distance. Tailgating is also a logical way of preventing drivers behind from slamming into you, as by racing up to the car in front, you are creating that little bit of extra distance from the car behind. You will also develop lightning reflexes every time the car in front has to brake. Those improved reflexes will assist you in performing all of the above manoeuvres at maximum speed, giving other drivers no chance whatsoever of anticipating your movements. Other signs that the vehicle in front may be about to brake include a) they signal left despite already sitting in the furthest left lane, or b) you’ll hear that ever-reassuring crunch.

7.   Loading, unloading and dropping off passengers – Tenerife Drivers are busy people. They don’t have time to faff around with lay-bys or pulling over to the side of the road. Why have the wife walk a few metres more when you can simply drop her, grandma, the kids and 15 bags of groceries directly outside your apartment complex in the middle of the street? Rest assured that other drivers will give you at least 5 seconds of patient courtesy before leaning on their horns. Once the horns begin, you can reckon on being morally obliged to actually move your vehicle within a further 2 – 3 minutes, after of course having made detailed arrangements for Saturday night and having kissed each member of your family goodbye twice. This is also the perfect time to adjust your hair in the mirror or send another tweet before moving off.

Taxi drivers also enjoy this particular privilege. Their favourite pastime is to thrash the hell out of their 30 year old diesel Mercedes engine in order to overtake you, only to promptly do an emergency stop to drop off their petrified passengers in the middle of the street, again without making any effort to pull over to the side of the road. Other drivers should also bear in mind that Tenerife Taxi Drivers cannot hear other driver’s horns, at least not until after receiving their well-earned gratuity.

Lets all give a big hand to the Tenerife Driver. A modern day crusader carrying the torch for drivers everywhere.

Looking to test your luck whilst in Tenerife? Then why not head down to your local casino? Tenerife is home to 3 casinos, which are located in Playa de Las Americas, Santa Cruz and Puerto de la Cruz. Each casino offers a variety of games including American roulette, slots, blackjack and poker. Passports or National…

THE ULTIMATE TENERIFE GUIDE AND INFORMATION SITE FOR RESIDENTS AND VISITORS ALIKE Whilst dozens of web pages have been written purporting to be ‘guides’ to Tenerife, most contain very little information of real use or only cover a limited range of topics. TENERIFE GURU was created to fill in those blanks and to provide the...

UK Nationals – Claiming UK Pension & Welfare Benefits in Tenerife Last updated:  18th February 2020 Contents of this page: 1.  I’m off to Tenerife – Who should I inform? 2. Can I claim my UK State Pension from Tenerife? 3.  What type of UK State Benefits can I claim whilst in Tenerife?   An…