Things to Do in Tenerife – Top Tourist Attractions

Tenerife has a huge range of attractions, ranging from landmarks and natural areas, stunning scenery, plus various parks and other man-made attractions.

According to TRIPADVISOR in 2017, the top 10 attractions for visitors to Tenerife were as follows:

Spanish for “Parrot-Park”, Loro Parque is a 33 acre zoo just outside Puerto de la Cruz in the north of the island. It opened in 1972 and has steadily grown to the point where it now hosts an incredible range of animals and plants including 4000 parrots and 350 separate sub-species of animals. The park has Europe’s largest Dolphin-Show pool, the world’s largest indoor penguin exhibition and the longest shark-tunnel in Europe. It also has the largest Thai village outside of Thailand. The park also keeps Orca Whales, which has been criticised by some animal organisations. 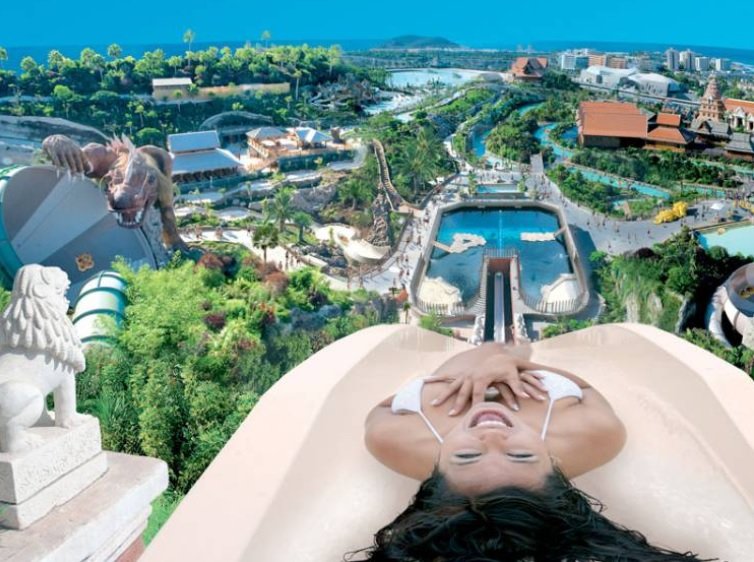 A sister-attraction to LORO PARQUE located just outside Playa de Las Americas in the south of Tenerife. The park combines thrilling water-rides with amazing scenery and vegetation. In 2013 CNN voted it the world’s best water-park and in 2015 it was awarded first place in the TRIPADVISOR TRAVELER’S CHOICE AWARDS. The park has a Thai decor throughout which was approved by the Thai Royal Family. The scariest ride is the “Tower of Power”, which consists of an almost-vertical 76 metre drop descending down to a transparent tunnel running through a huge shark aquarium.

Thrill-seekers also love the Vulcano ride: a four-person Bowl slide with a laser inside which prints a flashing image of a dragon, plus The Dragon ride, where you and up to 3 friends can jump in a raft and experience a wild ride as you are fired down a flume into the dragon’s den. Visitors also love Mai Thai River, the world’s longest lazy river, which enjoys the highest elevation of any lazy river at 8 meters (26 ft). There is also a large wave pool and artificial beach, where a siren is regularly sounded when the waves are about to begin.

Teide National Park is without doubt number one on the ‘Must-See’ list for visitors to Tenerife. The centrepiece of the park is Mount Teide, the highest mountain peak in all of Spain, rising to a majestic 3,718m (12,198 feet). The entire park occupies 190 square kilometres (18,990 hectares) and can be reached by road in less than an hour from almost anywhere on the island. The entire National Park is a stunning geological marvel featuring volcanoes, vents, solidified and flowing lava, craters, flora and unique aromas. The park also boasts a diverse range of fauna, with 70 species of invertebrate being unique to the park. There are a wide variety of reptiles, plus 10 species of birds that nest in the park, including the Blue Chaffinch, the Atlantic Canary and ‘Falco Tinnunculus’ (a type of Kestrel). The only mammals that are native to the national park are Bats, although Rabbits, House Mice, Black Rats, Feral Cats and the Algerian Hedgehog have all been introduced over the years.

The stunning red rock backdrop of Las Cañadas surrounding the mountain has often been compared to the surface of Mars and has been chosen as a set to numerous movies, including One Million Years BC, Intacto, Clash of the Titans and Wrath of the Titans. In 2017, Teide National Park was the eighth most searched location on ‘Google Street View’ with a total of 8.6 million viewers.

The zone was designated as a National Park in 1954. In 1989 it received an award in the top category of the European Diploma of Protected Areas and in 2007 the park was awarded World Heritage Site status by UNESCO. There is also an astronomy observatory established on an eastern ridge of the mountain.

Teide National Park is the most visited national park in the whole of Europe and in 2015 was the 8th most visited park in the entire world. In 2016 the park received over 4 million visitors.

The mountain boasts a Teleferico cable car, which takes intrepid visitors from the base station at 2,356 metres up to the top station at 3,555 metres in under 8 minutes. The top station has Wi-Fi, toilets and Spain’s highest public telephone should you wish to call your friends to brag, as there is no mobile phone signal there. Visitors are allowed to stay at the top station for up to 1 hour.

Although as high as most visitors want or need to ascend, this is still not at the peak of the mountain, which is a further 163 metres up. To ascend to the very peak of the mountain requires a special permit, which is free of charge but must be applied for well in advance. For more information or to apply for a permit, click here:

The site and car park are open from 8.00am to 6.00pm every day subject to weather conditions. Bear in mind that queues can be long at the most popular times or on public holidays.

For more details, check out the official website here: https://www.volcanoteide.com/en/teide_cable_car/prices_and_opening_times

The link below features a nice video clip of the cable-car ascent:

N.B. Visitors with heart problems, pregnant women, and children under the age of 2 are not permitted to ascend due to the risk that the high altitude may pose to their health. Consult your doctor before planning your visit if you have any health problems.

Whilst some like to make their own way to the park and explore independently, there are also a variety of organised tours and excursions available, often with very knowledgeable and personable guides. Popular tours include the Teide Observatory, Astronomical Tour, Sunset Tour and Teide By Night (stargazing with champagne!) 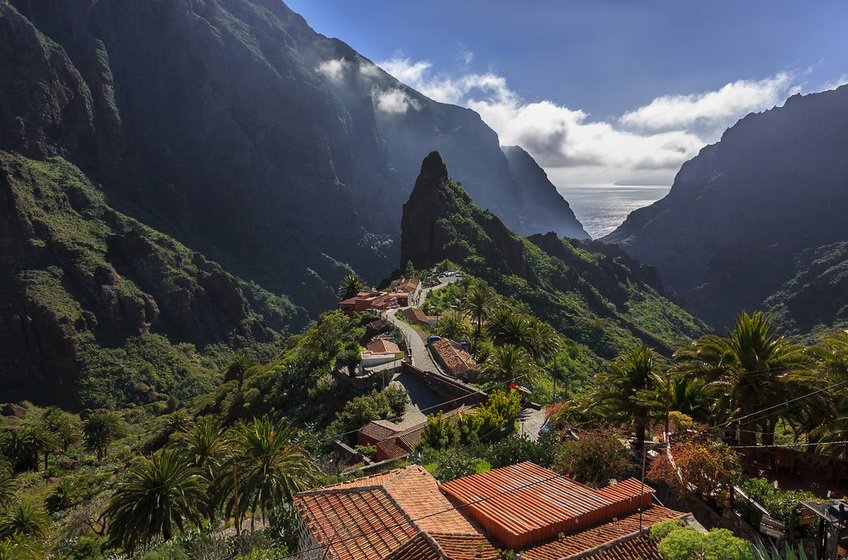 Masca is a picturesque mountain hamlet on the island of Tenerife. The village has a population of approximately 90 and sits at an altitude of 650 m in the Macizo de Teno mountains, which extend up to the north-western-most point of Tenerife.

The verdant Forests feature an abundance of cypresses and palm trees. The village sits at the top of the Masca Valley. Many visitors report it as being the most picturesque place on the island. The hiking trail runs 4.5 kilometeres (2.7 miles) from the village down the valley to an unspoilt beach on the Atlantic. The route is very popular, although it can be a fairly tough hike which takes about 3 hours each way. The majority of hikers do the route in only one direction (down!). Most then take a boat to Los Gigantes (‘Masca Express’) INSERT PHOTO OF BOAT, costing approximately €10. Hopefully there will be enough time to enjoy the black volcanic sand beach before your scheduled boat arrives.

You can also book tickets from the small reservation desks situated at the bottom of the valley before you reach the beach.

Alternatively, more adventurous hikers do the ascent (or both the descent and ascent) and return to the village at the top, from where you can catch a taxi. Typical prices back to Los Gigantes are approximately €10 – 12 Euros. To hike both ways will typically take anywhere from 4 – 7 hours depending on your fitness and whether you are prepared to forego some wonderful photo opportunity stop-offs.

The trek is not particularly easy and some pathways can be slippery close to the streams or where it has been raining, so take care and go at your own pace. Hikers are recommended to bring strong hiking shoes or boots, sunglasses, sun protection/hat and a day-pack. Trekking poles are also a good idea.

The following webpage has more detailed information on the hike and what to expect. 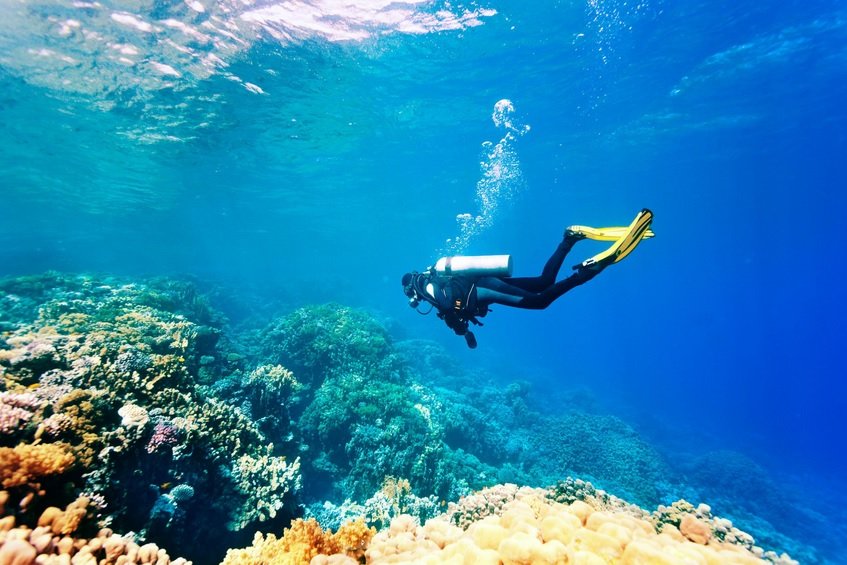 Looking for one of the best spots on the planet for scuba or snorkelling? Then look no further! Tenerife’s volcanic past have created an underwater world of breathtaking scenery, spectacular rock formations and a plethora of marine life that divers enjoy so much that they return again and again. Divers often spot dolphins, turtles, stingrays, barracudas, giant anemones, moral eels, octopus, parrotfish, puffer-fish and many other amazing creatures.

With its enviable sub-tropical climate, scuba diving is possible all year-round in Tenerife. Typical water temperatures range from lows of 18c (64f) in winter to around 24c (75f), meaning divers can enjoy the waters year-round with the lightest wetsuit.

There is a large selection of professional dive schools on the island who can put together the perfect dive package to make your trip truly memorable.