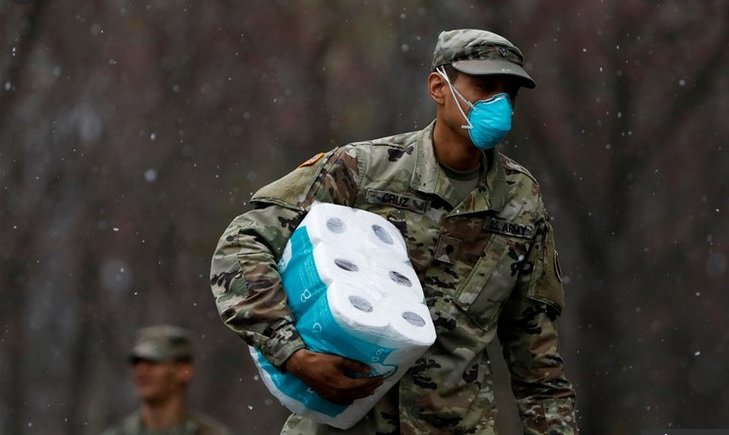 Most readers will be painfully aware of the constant bombardment of everything ‘Coronavirus’ across the media and internet over the past few weeks.  Indeed, open any online newspaper and count how many articles you have to scroll down through to find a story that is not directly or indirectly related to Coronavirus.

Indeed, the coverage has been so comprehensive and has been covered from so many angles, we have received very little demand to cover the topic on this site. However, we are now receiving queries regarding when the quarantine will be lifted and how quickly the island will return to normality.

As everyone closely associated with Tenerife will already know, the island (and indeed the whole of Spain) has been subject to a strict quarantine and a ‘stay at home’ policy since Sunday 15th March. The quarantine period was scheduled for an initial 15 days, but has now been extended until 12th April, with the distinct possibility of yet another extension thereafter.

As to when the island may return to normality, the answer is: how long is a piece of string. Without doubt, tourists are unlikely to flood back to the island the day after travel restrictions are lifted. Some are predicting that the economic effects of the government’s draconian coronavirus policies could impact the island for many years to come. The answer is, we simply don’t know. However, one thing is certain, the longer the lockdown continues, the worse the economic situation will become.

Whilst human nature requires us to abhor every single death caused by any illness, many locals remain concerned by what is being described as Coronavirus ‘hysteria’ and ‘scaremongering’ being whipped up by TV and online media, whose commercial goal is, of course, to increase their viewing figures and ‘clicks’ in order to sell advertising. Many also attribute the recent trend of ‘panic buying’ to that very same media scaremongering. Even the most sane among us has been tempted to pop down to stock up on those affected items, albeit in more modest quantities. 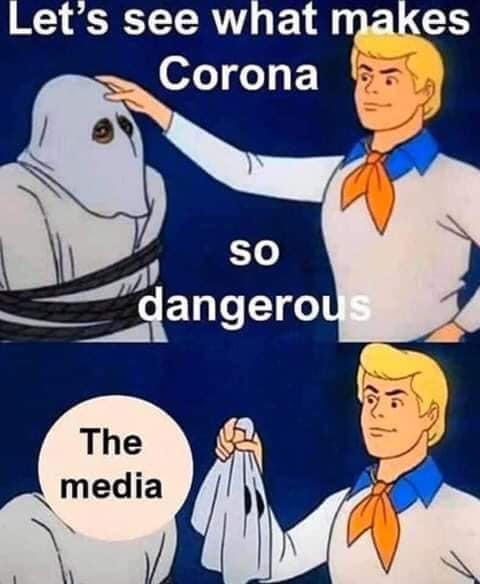 There is a good reason why sports broadcasters switch off their cameras when a ‘streaker’ runs onto the pitch or where there is a huge brawl in the stands, other than the obvious ban on broadcasting nudity or scenes of violence before 9.00pm. It is due to the well-known pyschological principle that people get their behavioural queues from watching the actions of others. How many would engage in panic-buying if they weren’t bombarded with images of shoppers fighting over ‘bog-rolls’ and clearing out shelves? The same happens on ‘Black Friday’ and the January Sales, when the media are encouraged by their corporate sponsors to run round-the-clock stories about bargains disappearing fast, in the knowledge that it will increase the hype and drag even more desperate buyers to the stores, afraid that they might ‘miss out’.

But without 24/7 media coverage during Coronavirus, would the public even have known that a small handful of Doomsdayers had ventured out of their nuclear shelters to start panic-buying?  Sadly, there are a few limited occasions in life where it is better that people are kept in the dark for their own protection.

So how much should we really fear Coronavirus? Well, opinion is divided on the issue and few ‘experts’ have any real answers at this stage. Some claim that only 1% percent of the elderly or those with pre-existing conditions will die from the disease and that the vast majority of healthy under 70’s will suffer nothing more than a mild fever or ‘common cold’ symptoms. Others claim the figure is as high as 4% and could affect all ages, whilst others rely upon the WHO’s somewhat abstract estimate of 3.4%. Some even boldly claim that “Millions could die”.

However, the biggest problem in establishing the true figures is that testing is now routinely denied to those not showing symptoms. Similarly, those showing little or no symptoms are unlikely to even to visit a doctor or medical facility where they could be tested. As a result, many experts believe there are potentially millions of undocumented carriers of Coronavirus out there with little or no symptoms.

On that basis, it is highly probable that the mortality rates we are seeing from Covid-19 actually represent a much smaller percentage of those infected with Coronavirus than previously thought. If the actual number is, for example, 2 million people infected, who show little or no symptoms, then the true percentage death rate plummets to approximately 0.3%. That is barely higher than regular flu and numerous other respiratory viruses, which run at approximately 0.2%. However, the truth is that we just don’t know – and neither do the ‘experts’. Until we know for sure, there is clearly no point in us panicking, hoarding or scaremongering.

Some experts also claim that Coronavirus cannot be compared to the flu or the dozen or so other respiratory diseases. They cite various reasons, including the lack of any vaccine, the longer period before symptoms develop, the greater effect on the elderly etc etc. However, for the rest of us that live in the real world, the only figures that really matter are the number of hospitalisations and deaths, which most certainly have to be measured and compared against other illnesses.

As of midday on 24th March, approximately 390,000 have been tested positive for Covid-19 worldwide, whilst 17,000 of those have died. Meanwhile, of the 271,000 currently infected patients, some 12,000 remain in a serious condition. Regardless of any ‘differences’ between Coronavirus and other illnesses, it is an indisputable fact that there are numerous illnesses, conditions and accidents that cause a far greater number of fatalities annually, including ordinary flu. To ignore or belittle any illness causing millions of deaths each year, simply to sensationalise the latest less-deadly virus, is an insult to all those who die and their grieving families.

To put things into perspective, let us look at some of the larger killers on an annual worldwide basis:

When considering the above figures, many could be forgiven for thinking that the relatively miniscule number of deaths from Covid-19 pale into insignificance when compared to the other millions of deaths highlighted above. Millions die in road accidents each year, but there is no ban on cars, buses or trucks. Clearly, governments consider that the social and economic need for road transport outweighs the enormous fatalities. Instead, they adopt ‘compromise’ measures, such as speed limits, drink-driving laws and driving tests to try to limit those fatalities as far as possible. However, with Coronavirus, the equivalent ‘compromise’ measures have been discarded from the very outset in favour of an outright ban.

As can be seen from the figures above, an estimated 6.47 million people die from other respiratory viruses each year. The death rate from that category is therefore a whopping 3,800% higher than Covid-19 to date. So why is there no flu lockdown each winter to ‘flatten the curve’? Couldn’t any of those millions of flu deaths be prevented by quarantine? Why is Coronavirus so different or so serious?

For Covid-19 to represent a bigger threat to public health than ordinary flu, cases would suddenly have to increase by 3,800% in the next month, before April’s warmer weather sends the disease into retreat in the northern hemisphere until next winter. Even in Covid-19 epicentres like China, Italy and Spain, the growth in cases and resultant deaths is still dwarfed by regular flu deaths. Covid-19 vaccines are also reportedly close to being launched and should be available well before next winter, which will presumably reduce the number of infections and deaths significantly for next year and beyond.

Many virologists also advocate the ‘herd immunisation’ approach, whereby the virus is allowed to spread naturally until a majority of the population has been infected. Whilst this may result in a slight increase in deaths during the first year, the contagion and death rates in subsequent years is typically reduced by a substantial margin. If this approach is correct, then it is also arguable that imposing a quarantine simply delays the herd immunisation process and kicks the can down the road.

Possibly the biggest argument cited for imposing quarantines is the overstretched medical services on the ground at the key coronavirus epicentres. However, that argument technically has nothing to do with Coronavirus. The fact is that the hospital bed and equipment crisis is not caused by Coronavirus, but by repeated austerity budget cuts and lack of investment in hospital infrastructure, equipment and medical staff throughout Europe.

Given the undisputed estimate of 6.47 million deaths resulting from the other respiratory viruses worldwide, it is fairly obvious that a large number of ICUs and hospital wards around the world that are currently close to, or exceeding capacity, are actually occupied by a substantial number of those 6.47 million sufferers of the dozen or so other viruses which currently carry a far higher mortality rate than Covid-19. Rather than Covid-19 being the cause of the hospital crisis, is it possible that the relatively small number of Covid-19 cases, when added to the larger existing seasonal illness caseload, have simply caught the world’s hospitals ‘with their pants down’ and that the Covid-19 cases are little more than ‘the straw that broke the camel’s back’?

Meanwhile, the media are conspicuously silent about this year’s hospitalisation and mortality figures for flu and other respiratory viruses. Perhaps they are afraid that putting Covid-19 into proper perspective might shift focus away from their latest tool for hysteria, scaremongering and clickbait. After all, regular ‘flu’ isn’t nearly as sexy or scandalous. Meanwhile, politicians do what they always do best – trying to remain popular in the eyes of the public, whilst basically not having a clue as to the best way forward. They instead depend entirely upon the advice of the World Health Organisation and a small cabal of ‘health advisors’, whose are as much politically motivated as they are concerned with public health.

Conclusion and the Way Forward

Regardless of the differing beliefs as to the best way to control and reduce deaths from Covid-19, it does not require an economics degree to see that the current global policy on Coronavirus is going to trigger the biggest worldwide recession the planet has ever seen. For destinations like Tenerife that are entirely dependent on tourism, that could easily bring economic destruction and set the island back countless years. When we look back on this month’s events in the painful years to come, how many deaths from Covid-19 will it take to justify that economic outcome in the eyes of the millions of people worldwide who stand to lose their homes, jobs, businesses, families, or even their lives (see the startling suicide statistics above).

Meanwhile, for those looking for a different perspective on the subject, we recommend reading this thought-provoking article by Jerry Klinger, writer for ‘The Times of Israel’:  CLICK HERE

There is also another good article from AIM.ORG:  HERE